The main purpose is to save researchers’ and students’ time to debug for a minimum-viable environment before actual study can be proceeded.

Important notice before you start

You have to prepare IMSI, Ki, OP/OPc, SQN of your SIM cards.

Install docker-compose and make sure it works before going forward.

Clone the repository and build base docker images of open5gs and Kamailio:

.env is the only file most of them need to edit as per their deployment needs

Edit only the following parameters in .env as per your setup

I use srsENB and USRP B210 in the lab. Sometimes you may want to restart srsENB while keeping the core network running. It is thus recommended to run srsENB separately.

If there is a need to change the Core Network component configuration files found under their respective folder, make sure to re-compile images using docker-compose build again. 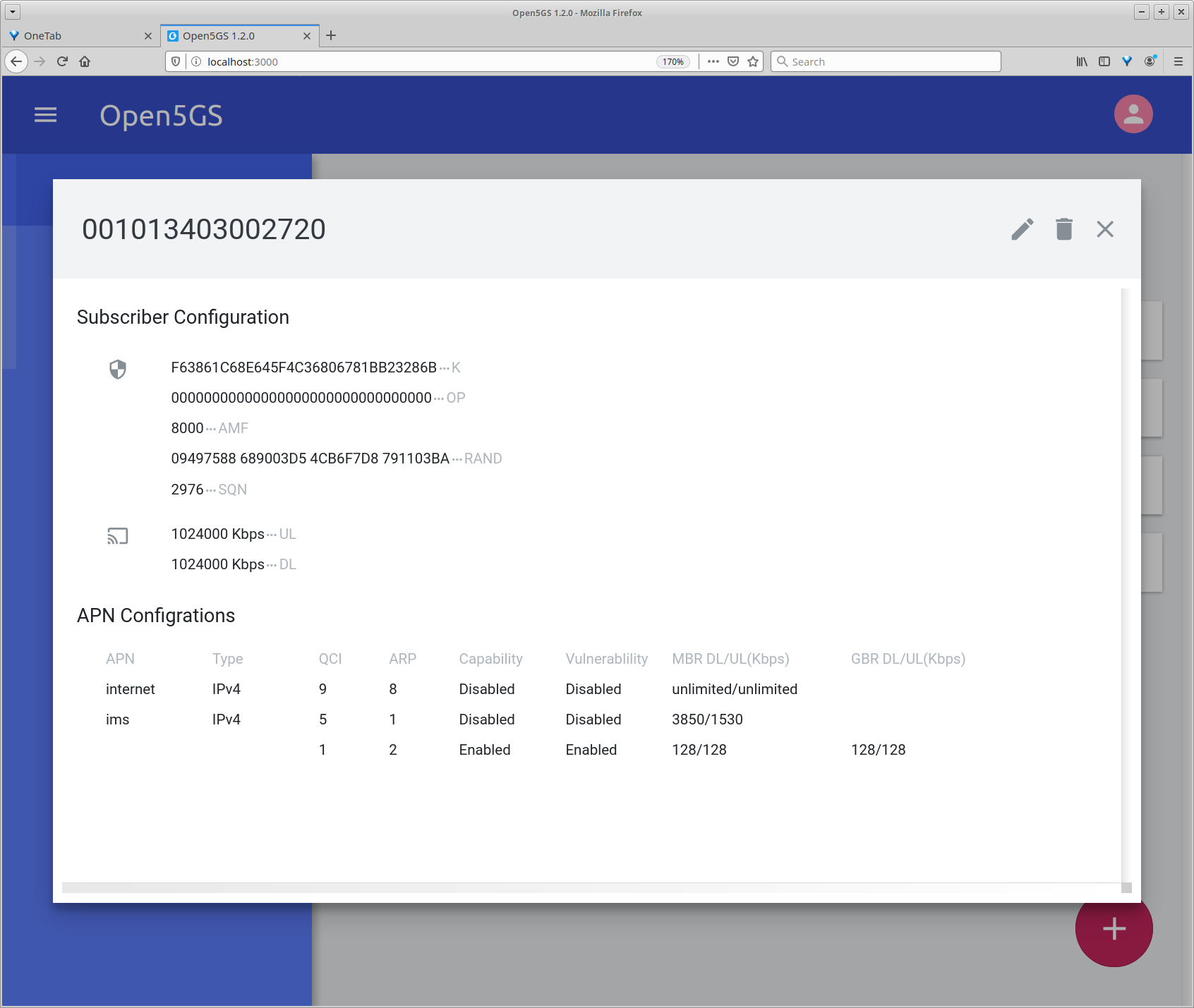 For already running systems, copy SQN from Open5GS and type it in FHoSS. You can type SQN in decimal. FHoSS will automagically convert it to hex.

Pay special attention to copy/paste. You might have leading or trailing spaces in FHoSS, resulting in failed connections!

Thanks to Open5GS, the topology is super similar to SAE on Wikipedia.

On your cellphone, there should be internet and ims.

CoIMS should look like the one below. If you don’t know what CoIMS is, please refer to step 23 of VoLTE Setup.

PCAP files of successful calls can be found on VoLTE Setup.

When DNS is not properly set, you may end up with 478 Unresolvable destination (478/SL):

If the port if not open, or DNS is not properly configured, the phone cannot reach P-CSCF and fails.

If there is an NAT between PGW and P-CSCF, IPsec-NAT would not work, and the PCAP looks like the one below. N.B. that you need to run P-CSCF as root, in order to add xfrm state and policy. 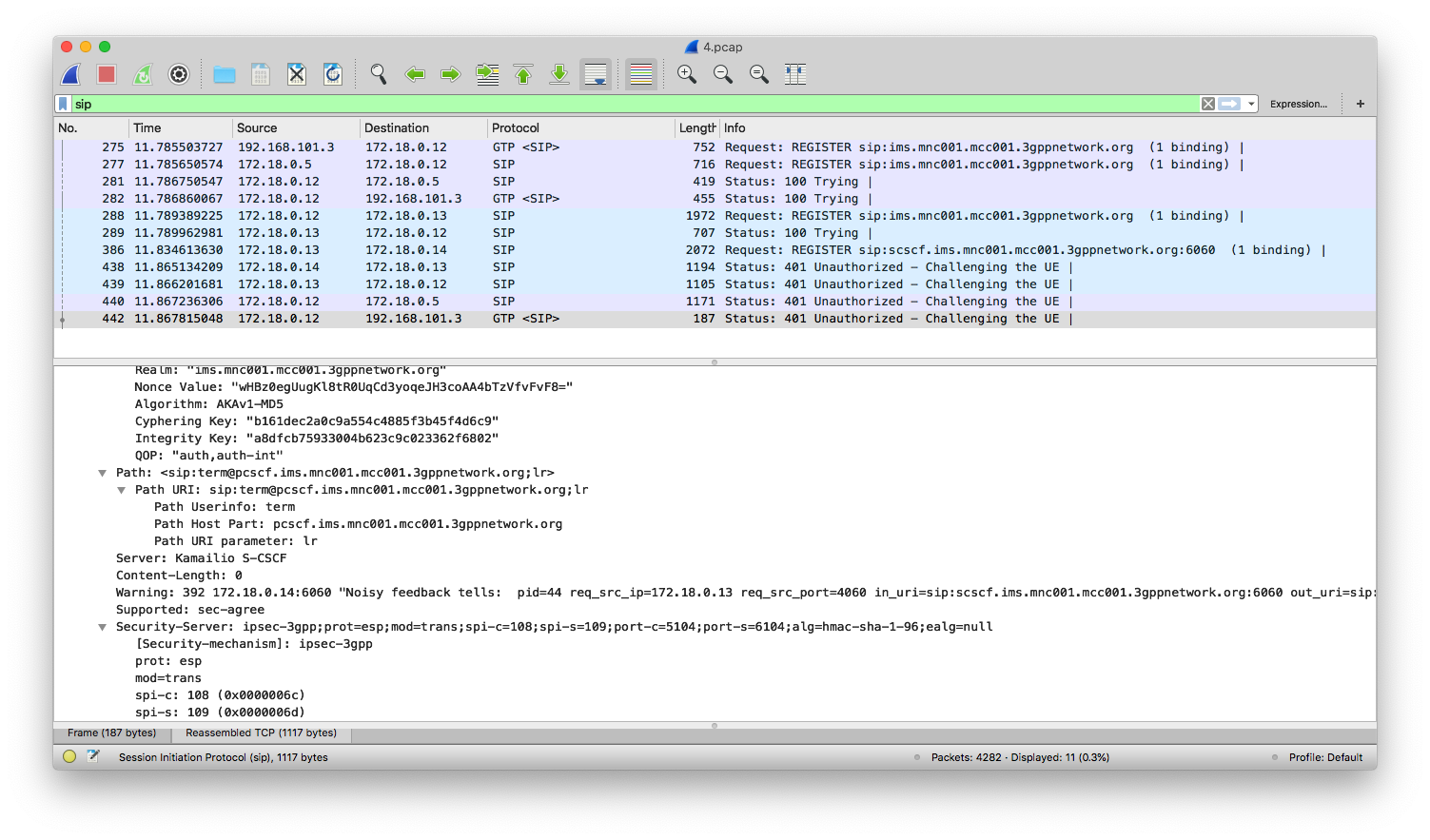 Herle Supreeth has shared PCAP files of successful calls, including

The successful calls were made with a commercial eNB (in his case a Casa smallcell), while srsENB the ACK takes a very long time to reach the UE, resulting in disconnected calls. 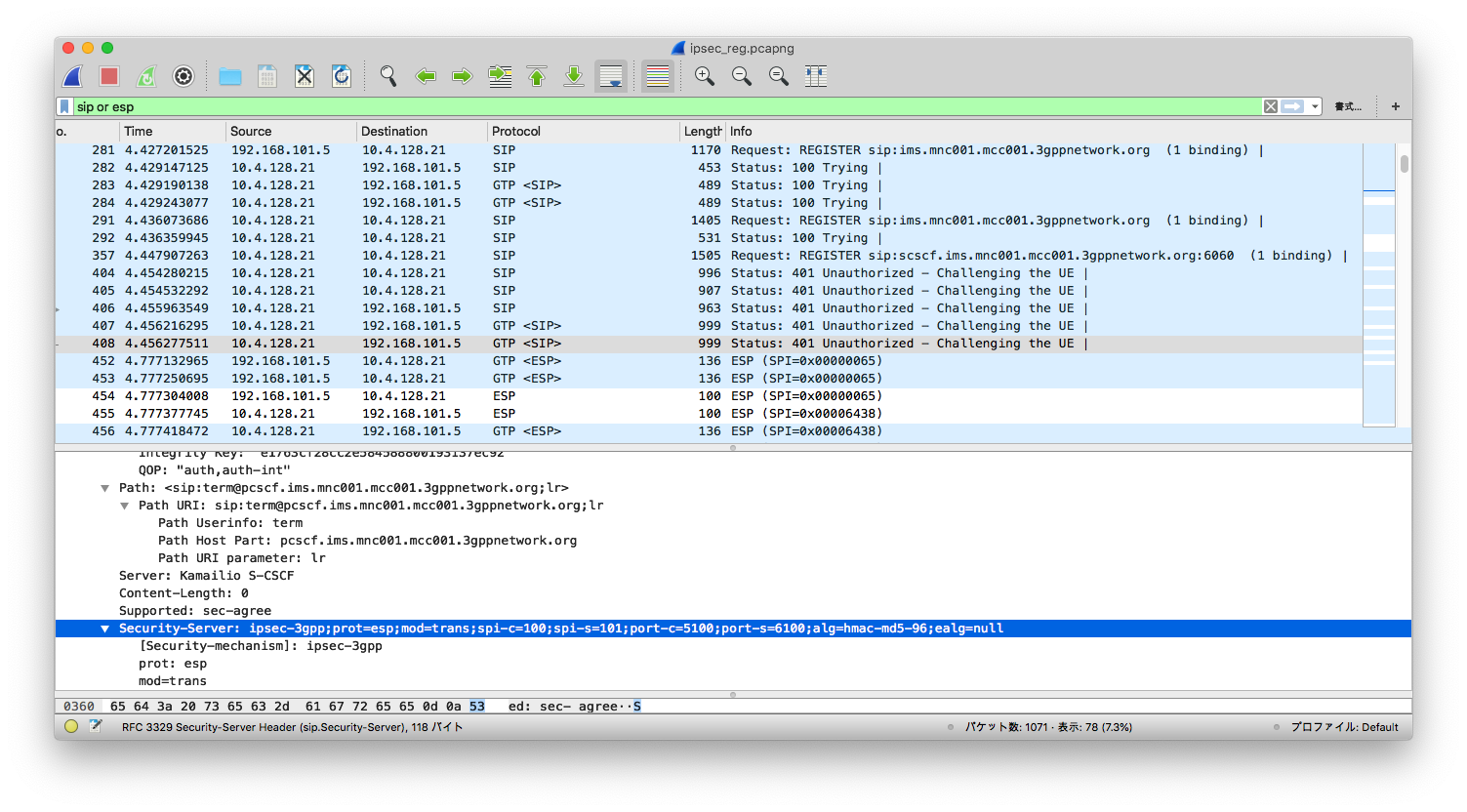 From the screenshot, we see a UE that supports IPSec got a response from S-CSCF, indicating that ipsec-3gpp is supported, protocol is ESP (ethernet proto 50, IPSec). Client port (port-c) is 5100 and server port (port-s) 6100. Refer to IMS/SIP - Basic Procedures if you want to know more. Also, notice that packets after 401 Unauthorized are transmitted over ESP.

If a UE does not support IPSec, you don’t see the “security-server”, as shown below: 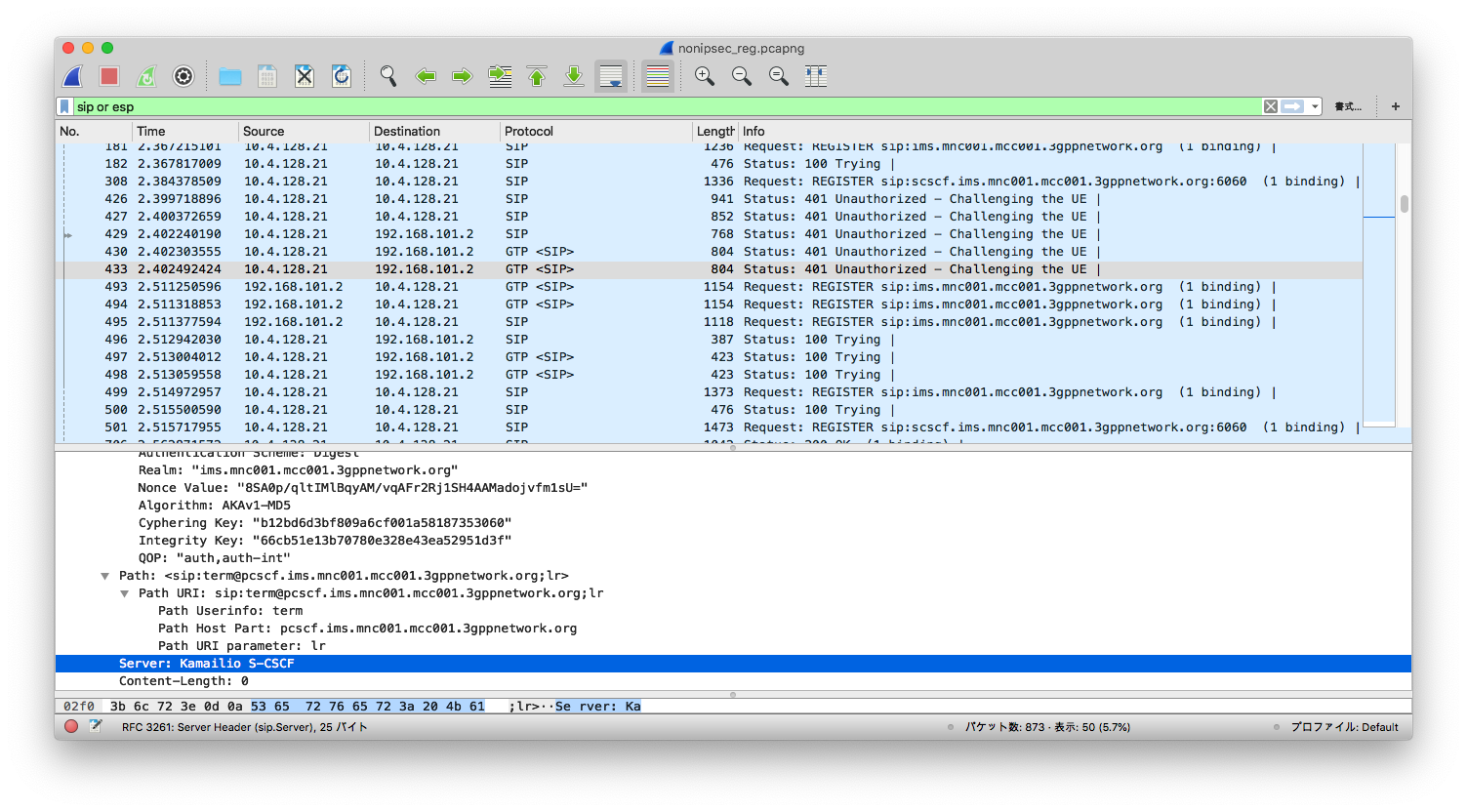 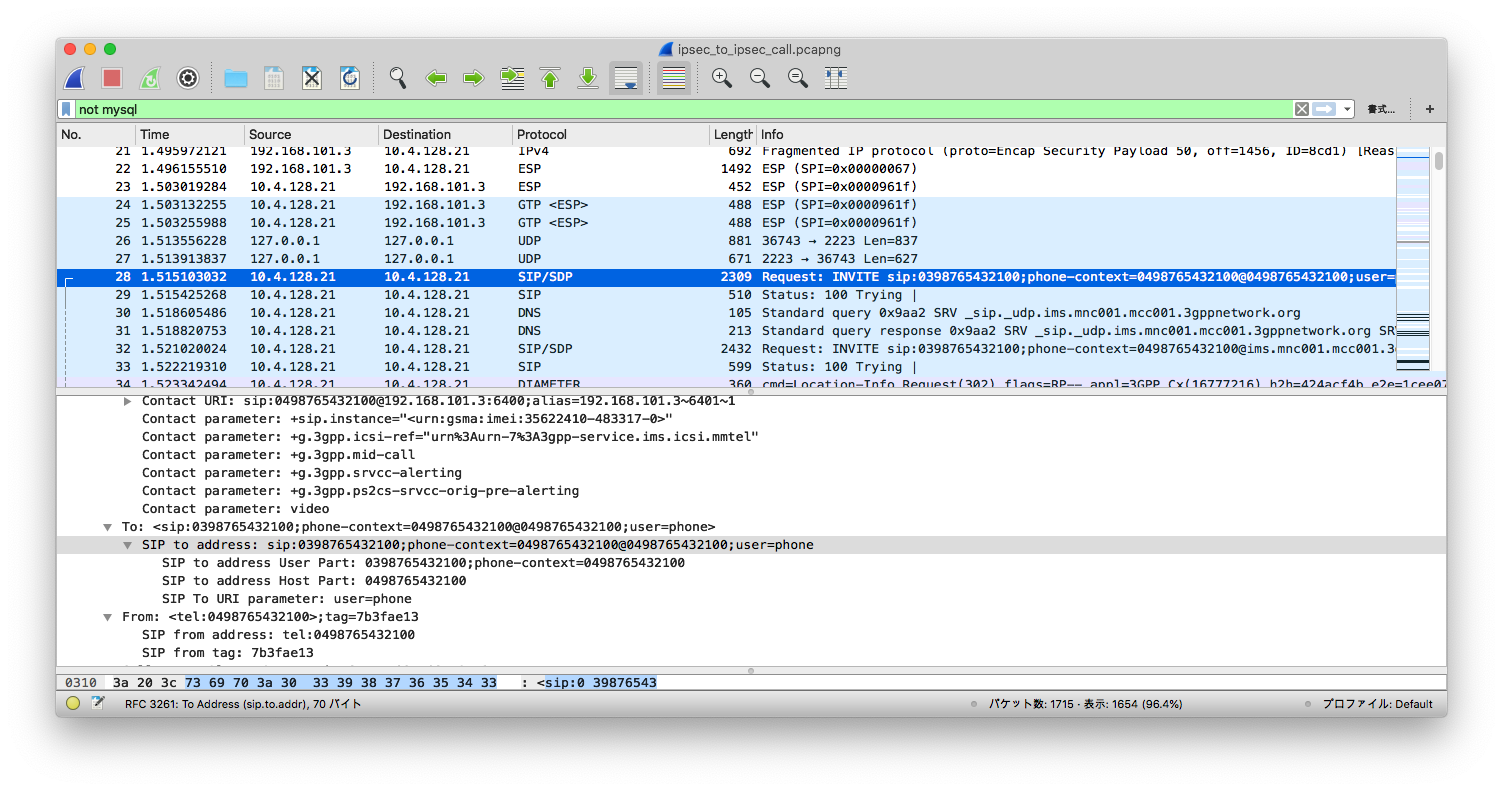 The Wireshark above shows that after several IPSec (ESP) packets, S-CSCF is sending a SIP INVITE for UE 03 to UE 04. To be more precise,

The SIP port of the caller (contact) will also be passed to the callee,

After S-CSCF forwarded the INVITE to P-CSCF, it returns a 100 Trying, and contacts with the callee via IPSec: 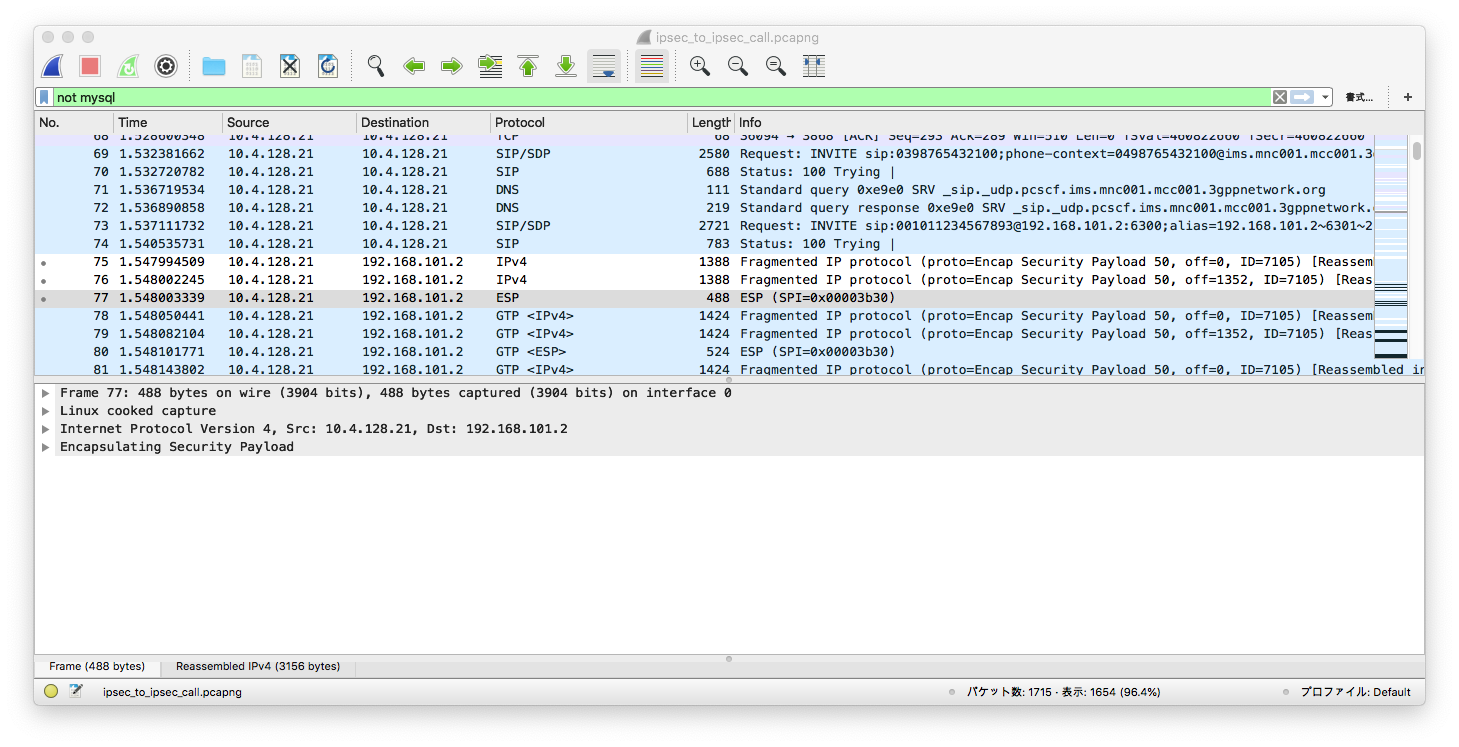 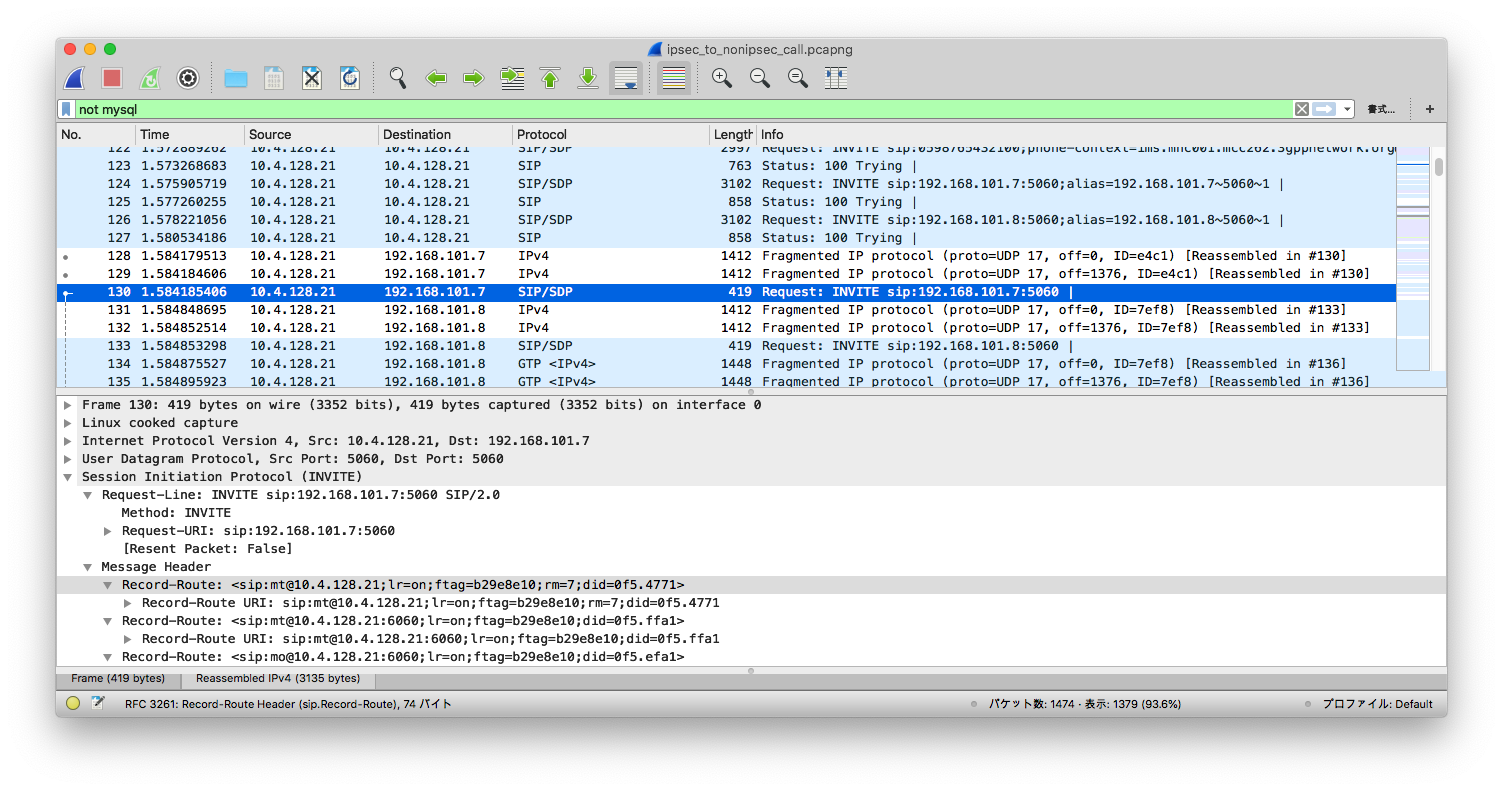